Mr.7 is now Mr.8! But first, a little about Malta, our street is quiet, but close to shopping and buses and ferries.

We love our hardware store, Spoons. They provided our little italian coffee pot. Our little street, Triq il-Freres is not a long one, but it’s just off the main road up our hill and so is pretty quiet, not a lot of traffic. Though the first four days we had a car and it was a pain to find parking.

In this shot, see the covered balcony on the 1st floor, it’s endemic to Malta (I even got a tshirt with them on it, it’s that iconic):

Our first jaunt the next day was Golden Bay, interestingly enough it was warmer than I thought it would be, and we took our shoes off and jackets and the kids swam in the ocean. We even met a fellow kiwi named Laura, hi Laura!

The Golden sands made me miss New Zealand more than a little bit, especially since it’s summer there right now:

The next day we went to St. Peter’s Pools, It’s more beautiful in the summer shots I’ve seen of it online, but fun for us nonetheless. We spent a couple of hours here and only saw a few people. We saw a couple from the UK and her partner decided to brave the waves. Good onya, mate!

At the top of the road entrance there was a convenient outdoor fireplace/bbq, looks like it gets used a lot!

The walk down was pretty picturesque but don’t drive down here. I made that mistake and had to back up all the way to the bbq again, there’s nowhere to park or turn around.

Once we got down to the Pool we could see, at low tide, pools that are partially man-made that would be pretty great on a hot day.

The waves were crashing nearby, the wind whipped them up, which gave the place some drama, but really we had a great time walking around here and over to the next pool/inlet which was even more blue.

Lots of shells buried in the sandstone here, mainly sand dollars like this one:

We packed up the car again and headed towards Valletta (I didn’t realise it at the time, because I was still getting my bearings) and found this sweet playground. Tired, hungry, wet and cold kids meant we stayed for 15 mins and then headed home. You can see the Valletta wall in the left of the photo:

There was a parents area to the left of the playground area. Nice touch!

Every night at our apartment we can hear the bells ring from our neighborhood church. Funny thing is they never seem to ring at the top or bottom of the hour, it seems almost random. The running joke in the house is, “Hey it’s 8:17, the church bells are ringing right on schedule!”

Lots of old store fronts around Valletta, it reminds me of Riga, Latvia mixed with Seville. This is one of my favourite signs:

Another cool thing in our neighborhood, there’s a toilet underground in front of the police station, must cut down on people urinating in the streets in summer? 🙂 It’s a great idea, space saving and convenient! I’m still spoiled by New Zealand, which seems to have a dunny on every street corner and in every park (except downtown Auckland):

Our local market has gluten free options and all the eggs we could possibly eat. It saved us the first night when we found a parking spot and didn’t want to leave it to find food. The next day we found Lidl and stocked up, that shop lasted us a week and a half; a nice break from having to shop every two to three days which is more the European way:

I can’t believe my boy is 8 years old, where does the time go? He’s been alive as long as we’ve lived in NZ, minus the two years we’ve been away; hard to believe. It’s early rise, as usual, and we had all the presents on the table ready to go. Thanks to Ms.11, Ms. Wolfy, for the decoration and present wrapping help!

It’s a little cold and drafty in our place and dad is stingy so we bundle up instead of turning on the heater, until we’re desperate. 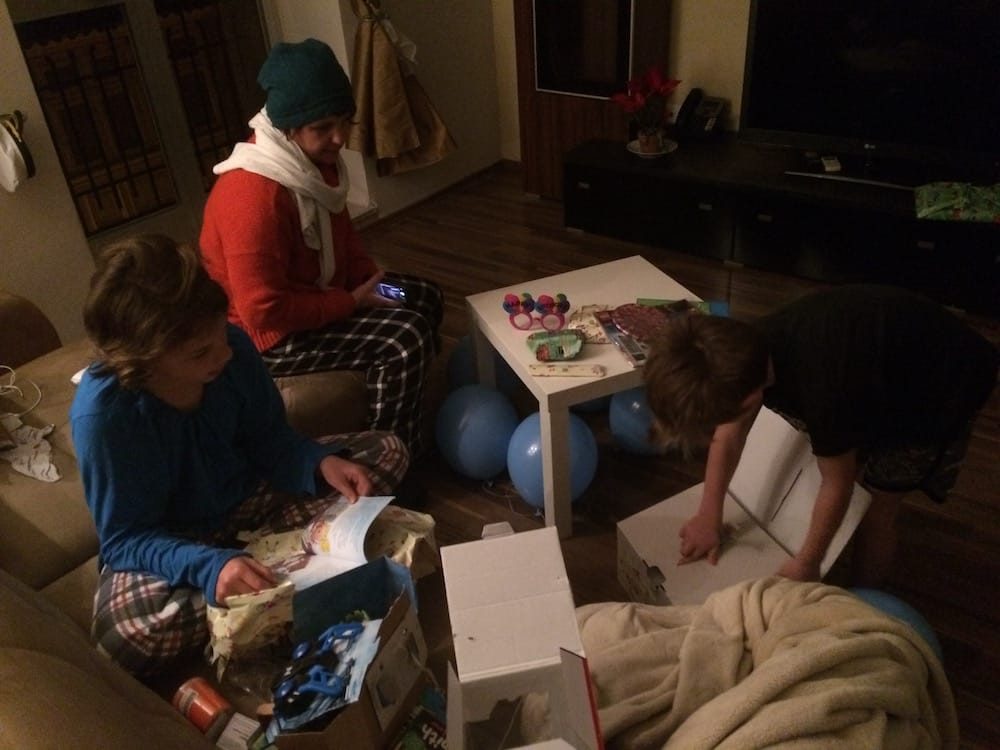 For his birthday treat (and his one thing per place activity) we went to the Aquarium. It was pretty good considering Malta is a tiny island nation of about 500,000. Good exhibits, well thought out.
We took the bus, the second bus didn’t come so we hoofed it (it passed us as we walked, darn it!) but this is not surprising. As long as you’re flexible, Malta’s transport is pretty good, and you can get all over the island on your 1.50E for a 2-hour ticket.

On our walk home we see bars, restaurants and businesses that become landmarks. This one is a favourite of mine called Jack of all Trades. Reminds me of me a little bit, though I’m working more on mastery these days. So far Malta has been comfortable, familiar, even a little drowsy, punctuated by transport fun like overly full buses and neighborhood shouting every now and then.