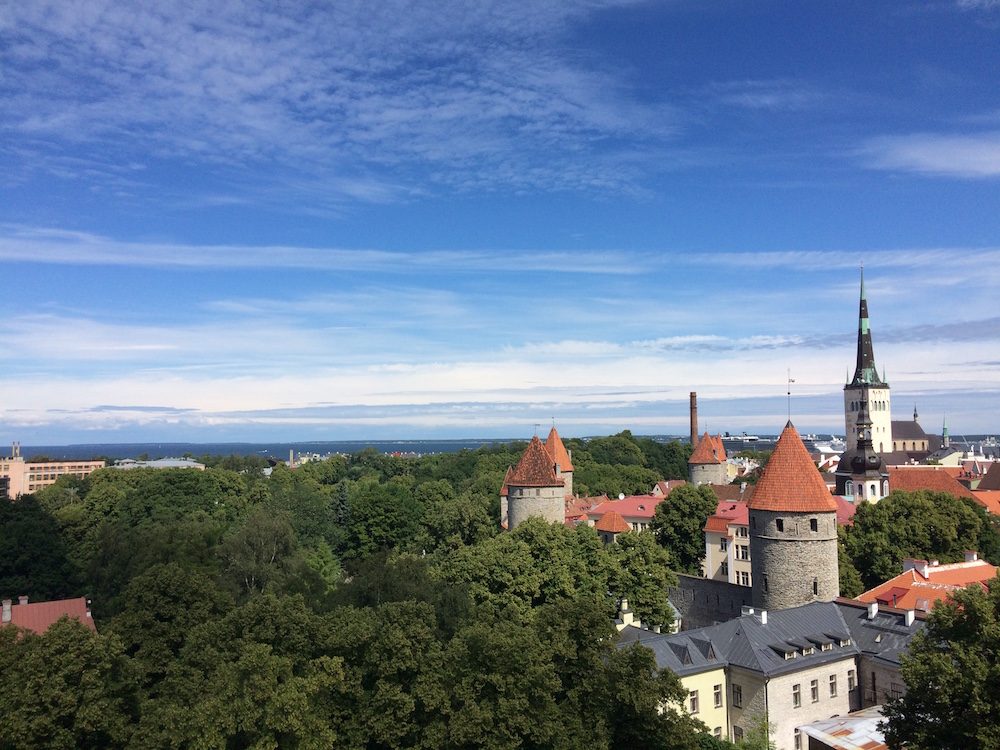 I know I know, how long has it been? Sorry. Time is speeding up every week we are away. We barely make it through the week and realise that it’s another week and we haven’t done everything we need to. It’s probably down to prioritising. We really need to Skype with people! Its on the To Do list.

So what to write? I love Estonia, it’s so green and full of history, it’s beautiful, easy to get around. It’s different to Latvia. In Latvia you feel the Soviet influence, they’re still trying to get themselves out from under, where Estonia there is a sense of “look how far we’ve come”. They take something and turn its into something even better. The old Soviet built apartment buildings have been painted and touched up to make them less imposing. Estonia saw an opportunity when they came out from under the Soviet umbrella. They knew they needed to do something different, they needed to make the most of the resources they had – people. So they ran with it. They saw the digital age growing and made the most of it. Estonian’s are all over the digital age. I love their ‘E’ card. Everything is on this card, your school history, your medical records, licence, passport (for the EU), car registration, insurance, your banking, you can vote with this card and sign legal documents. It’s like LastPass for your life. I’m a huge fan of LastPass and I would love to have a card like this.  Not everyone likes the idea (mainly American tourists I’ve noticed) “what about security, what if you lost it”. There are safe guards of course. The locals seems to like, and that’s what counts.  Other notable digital ‘things’: there is free internet everywhere (except our apartment of course) as they consider this a ‘right’, Estonian’s teach coding to preschoolers (which is probably why every kid has a phone), and among other things you can become a digital resident of the country (which I will fully admit intrigued me, until I realised that would mean more paperwork… or forms and I’m over that right now.) Buses are free for residents and if you’re not a resident then it’s 25 Euro for a month of unlimited bus/tram.  (Just swipe your E card). Which I know is not ‘digital’ but fits with the vibe.

I also love that Estonian’s celebrate their history and have medieval days, with jousting and sword fighting etc. We went earlier in the month. What amazed me about the sword fighting was that is was like MMA with swords! They were whacking the crap out of each other, it wasn’t a demonstration, it was a full on fight, injuries and all. They weren’t trying to kill each other, but it sure could be taken that way.

But it’s not all amazing of course. We don’t live, live here, so we have a different view of things, but visiting like we do we can really get a good overview, it’s not all ‘Old Town’ and postcards.  We found out that in winter the sun rises about 10am, and sets about 3pm and it’s usually all slush (thanks global warming) and also grey. The weather is changeable (very Auckland like) where it’s hot one day and rainy and cold the next. There are areas of Tallinn where its all grey towers of soviet blocks, it’s imposing and a little depressing. Not the Tallinn you see in the tourist books. Then there’s the sewer smell. We thought it was just our apartment… nope. It’s common around here.

Estonia, I love it. I would really like to see what the city is like in the winter, I’m sure it’s a different world. Everyone is currently biking around, wearing shorts, garden displays (with power points so you can sit in the public garden and charge your devices) and hanging out.  Would I live here? I would have to experience winter to find out, because I’ve never lived in a cold place. I would think that the winter would be way too harsh for me, I’m a wimp.

I realise this is a bit of a lame blog post, it’s been a bloody long week, from me being glutened (again), work and a scramble to figure out what we’re doing next. So I’m sorry about that but hey, I wrote something at least.

So yes after Tallinn we fly to Frankfurt, we’ll stay just outside Frankfurt and then drive from Koblenz to Trier. Stay there the night then we’ll drive through Luxembourg, hit the Rochefort Brewery (That one’s for you Nato!) Before heading to France and stay the night and then on to our housesit just outside Brussels. We were going to go in a different direction, but well, it would be awesome to say we’ve stayed in France (not far from Givet, which is the Champagne region! It might be a boozy day, if only we had someone to drive.) From there it’ll be a direct shot to our first doggie hit. We’re excited. But man time flies.

I keep thinking to myself, that I really hope I get sick of travelling, because it’ll be tough to go home, after seeing this stuff. I can see how ‘re-entry’ after long term travel will be tough. I have more of an appreciation now for the returning O.Eers. But I’ll worry about that later!  First we’ve got to make our money last….